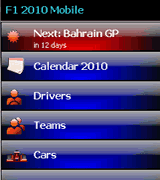 F1 2010 supports many displays from QVGA up to QXGA on all Windows Mobile devices (Pocket PC and SmartPhone)! There is a recent game for Android devices where you can be a manager of a Formula 1 team and win races.

Copy this code into your website if you want to link to the F1 2010 Mobile page:

Are you a developer ?
submit your software

More Freeware,
Applications for other mobiles

Our network,
Interesting places to explore